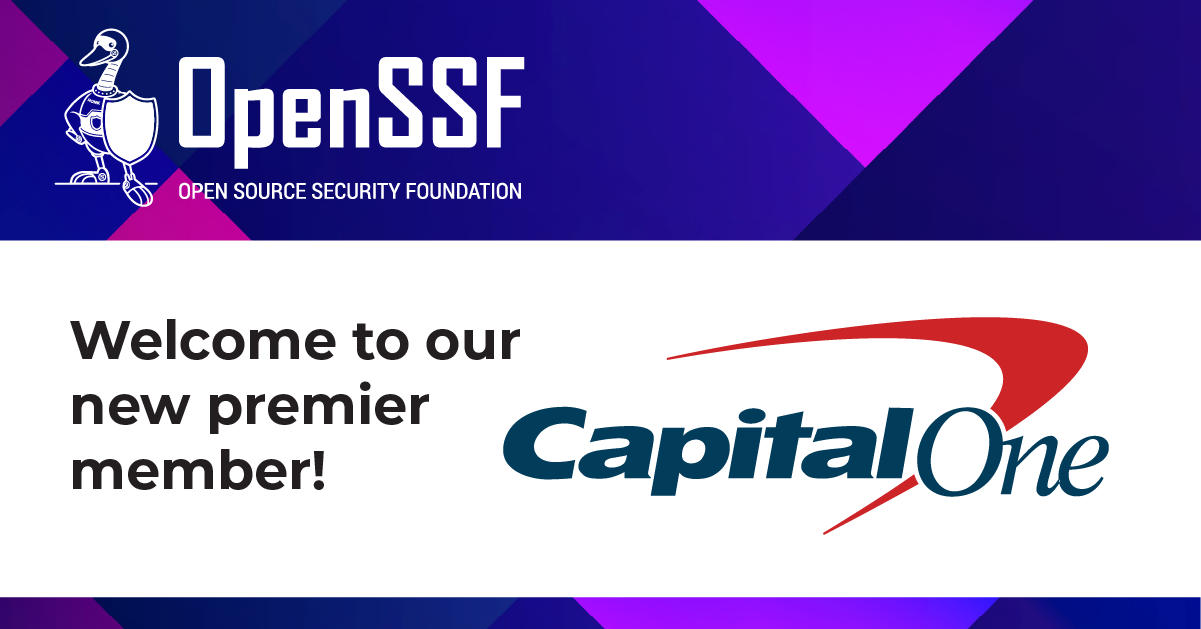 SAN FRANCISCO, August 24, 2022 – Capital One joins the Open Source Security Foundation (OpenSSF) as a premier member affirming its commitment to strengthening the open source software supply chain. OpenSSF is a cross-industry organization hosted at the Linux Foundation, designed to inspire and enable the community to secure the open source software we all depend on, including development, testing, fundraising, infrastructure, and support initiatives.

Capital One joins the OpenSSF Governing Board in charge of leading the organization and providing strategic direction. “We are happy to welcome Capital One to the Open Source Security Foundation,” says Brian Behlendorf, General Manager of OpenSSF. “As a highly regulated company that has invested in technology, Capital One has experience building the governance structure, modern architecture and collaborative culture that is critical for well-managed open source software delivery. By joining the OpenSSF, Capital One is demonstrating a serious commitment to secure open source software that benefits our entire ecosystem.”

As one of the nation’s leading digital banks, technology is central to Capital One’s business strategy and how value is delivered to more than 100 million customers. The company began a technology transformation over a decade ago, which included an open source-first declaration in 2015.  A modern architecture in the cloud is allowing Capital One to take advantage of the world’s innovations and accelerate delivery by committing to a collaborative software-building approach among the open source community.

“Today some of the most ground-breaking digital experiences created for customers are based on open source software. As a company that widely adopts this technology, Capital One is incredibly proud to join the OpenSSF and the world’s technology leaders as we collaborate to strengthen the software security supply chain,” said Chris Nims, EVP of Cloud & Productivity Engineering at Capital One. “As a highly-regulated company, we are seasoned in managing compliance and governance and advocate for standardization, automation and collaboration. We look forward to working together to identify solutions that advance the OpenOSSF mission and give back to the open source community.”

Earlier this year, the OpenSSF unveiled a 10-point plan at the Open Source Security Summit hosted in conjunction with the White House in May. The plan feeds into 10 different workstreams, like finding ways to reduce patching response times for open source software, developing new metrics to track code and components, moving the industry away from non-memory safe programming languages that make it difficult to find and fix vulnerabilities, establishing a framework for incident response teams that can be deployed across the open source community and conducting annual third-party reviews of the top 200 most critical open source security components. More recently, the OpenSSF hosted a Town Hall especially for open source software maintainers, contributors, software developers, and open source software users who know security is important, but haven’t made the leap to join an OpenSSF Working Group or Project yet. On Tuesday, September 13th, they will be hosting an OpenSSF Day EU at the Open Source Summit Europe in Dublin, Ireland and online.

The Open Source Security Foundation (OpenSSF) is a cross-industry organization hosted by the Linux Foundation that brings together the industry’s most important open source security initiatives and the individuals and companies that support them. The OpenSSF is committed to collaboration and working both upstream and with existing communities to advance open source security for all. For more information, please visit us at: openssf.org.

About the Linux Foundation