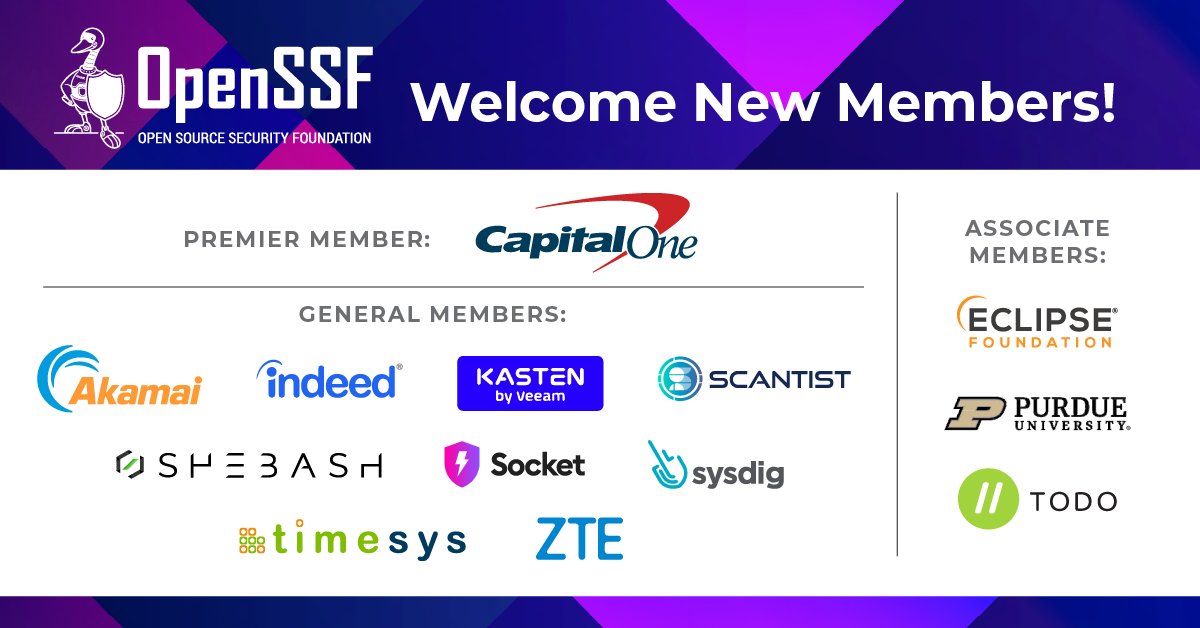 Hosts Next OpenSSF Day in Dublin

New premier member, Capital One, joins the OpenSSF Governing Board. New general member commitments come from Akamai, Indeed, Kasten by Veeam, Scantist, SHE BASH, Socket Security, Sysdig, Timesys, and ZTE Corporation. New associate members include Eclipse Foundation, Purdue University, and TODO Group. “We are excited to welcome new members to the OpenSSF,” says Brian Behlendorf, General Manager of OpenSSF. “As open source software security vulnerabilities continue to draw attention from governments and businesses around the world, interest in the work of the OpenSSF has been rapidly increasing.”

“A growing community of organizations, developers, researchers, and security professionals are investing the time and resources needed to strengthen open source security,” said Jamie Thomas, OpenSSF Board Chair and IBM Enterprise Security Executive. “New members of OpenSSF are joining at a time when cross-industry collaboration and innovation are needed more than ever to proactively respond to pervasive cybersecurity threats.”

Resolving the systemic issues that led to major security vulnerabilities like the log4shell incident emphasizes the urgency and importance of the work of OpenSSF. A recent Cyber Safety Review Board report declared that Log4j has become an “endemic vulnerability” that will be exploited for years to come and that the 10-point mobilization plan introduced earlier this year at the Open Source Software Security Summit II by the OpenSSF will improve the resiliency and security of open source software.

OpenSSF will host a full day of sessions on Tuesday, September 13th at OpenSSF Day EU on the eve of Open Source Summit Europe (OSS EU) in Dublin. Working Group leaders and community members will host sessions, panels, and fireside chats about ongoing work to secure the software supply chain and the future of open source security. Registration and attendance are free for all those attending the OSS EU.

“Today some of the most ground-breaking digital experiences created for customers are based on open source software. As a company that widely adopts this technology, Capital One is incredibly proud to join the OpenSSF and the world’s technology leaders as we collaborate to strengthen the software security supply chain. As a highly-regulated company, we are seasoned in managing compliance and governance and advocate for standardization, automation and collaboration. We look forward to working together to identify solutions that advance the OpenOSSF mission and give back to the open source community.”

– Chris Nims, EVP of Cloud & Productivity Engineering at Capital One

“Improving the security of open source software — so central to the internet ecosystem — is one of the most critical security challenges we face today. Only by gaining visibility into the network and the software supply chain can we reliably address security flaws when they occur at the code level. The technology community must support the open source communities we depend on with financial and technological resources to limit our collective risk. As a leading security and cloud services provider, we look forward to contributing to the Open Source Security Foundation and helping to advance this important work.”

“We are honored to be part of the Open Source Security Foundation (OpenSSF) and champion this initiative alongside our peers. Kasten by Veeam has an open source heritage, and with Kubernetes data protection as our core offering, security remains a critical underpinning for Kasten K10 design and implementation. As Kubernetes adoption continues to fuel Digital Transformation journeys for enterprises, more attention is rightfully being placed on security, especially with the inexorable rise of ransomware attacks. Kasten by Veeam is committed to ensuring the security and data protection of cloud native environments to better protect business applications.”

– Gaurav Rishi, Vice President of Products and Partnerships at Kasten by Veeam

“On one hand, the software industry is benefiting substantially from the rapid growth of open source, which has become the basic building blocks of the digital world. On the other hand, open source security is becoming more critical and all these risks are multiplied by the interdependent nature of open source. Now as a member of OpenSSF, we would like to contribute to the OpenSSF missions based on our recent research on open source ecosystem analysis to provide a quantitative view to understand the complexity and security of open source. We want to become the active participant, evangelist and ambassador for OSS governance in south east Asia to promote open source software supply chain security.”

“Since our inception, SHE BASH has witnessed a variety of predatory industry practices that get shielded from extensive scrutiny via the protective veil of closed source. At our core, open source software is a public institution that enables everyone to build their future. The combination of decades of apathy and the incentive mechanisms that sustain a culture of “don’t care” has allowed our company to stand out among tech’s largest and most culpable companies.  We have always considered “best practice first” as one of the main value propositions we can provide as a company, albeit a small one.  Open Source Software provided us the level playing field to make differences in key technological shifts within the public sector, and the evolution of these shifts are the development of best practices born from the open source that sustains all software life today.  It’s a true honor to be of assistance to the work OpenSSF is leading to remedy large structural mistakes that grew from decades of neglect.”

“As maintainers of open source packages which are installed over 1 billion times per month, the Socket team is intimately familiar with the massive growth in open source dependency usage. Modern applications use thousands of dependencies written by hundreds of maintainers, and installing even one package leads to dozens of transitive dependencies coming along for the ride. Unfortunately, it is far too easy for a bad actor to infiltrate the software supply chain and wreak havoc. That’s why Socket is proud to join OpenSSF and do our part to make open source safe for everyone with our industry-leading approach to software composition analysis which is used by thousands of companies to detect and prevent supply chain attacks. The Socket team is excited to work with other OpenSSF member companies to safeguard the open source ecosystem for everyone.”

“Sysdig is proud to be part of OpenSSF and work together to help guide open source security standards and secure the software supply chain. As a cloud security company built on open source, we believe the industry must come together to strengthen software for the common good. Having created and contributed Falco to the CNCF to help secure the runtime, we look forward to continuing open collaboration in the OpenSSF. The future of security is open, and what we do now will shape software forever.”

“With software supply chain breaches up more than 650%, securing the software supply chain is a big focus. We’ve been working for more than 5 years developing technology to help secure, monitor, and maintain open-source based embedded Linux and Android devices from exposures and vulnerabilities. We are so excited to be joining up on this community effort with OpenSSF and to be a part of the Linux Foundation again. By sharing technology and collaborating to build ecosystems that accelerate open-source technology development, device manufacturers and consumers everywhere will be able to rest easier knowing they are secure.”

The Open Source Security Foundation (OpenSSF) is a cross-industry organization hosted by the Linux Foundation that brings together the industry’s most important open source security initiatives and the individuals and companies that support them. The OpenSSF is committed to collaboration and working both upstream and with existing communities to advance open source security for all. For more information, please visit us at: openssf.org.

About the Linux Foundation